Some of the pads (the latest Revolution Unlimited, the Revolution Pro 2, the GC-400ES) have extra buttons under the pad (could be handy for GPB), have sticks with large range (46deg, configurable in some cases) and with ALPS pots etc.

Price is definitely high, but if sticks (and analog triggers) are good and software is good (allows button mapping, sticks tuning) ...
3

You know, just to keep people even more on their toes ...

Off Topic / Only in Austria ?! 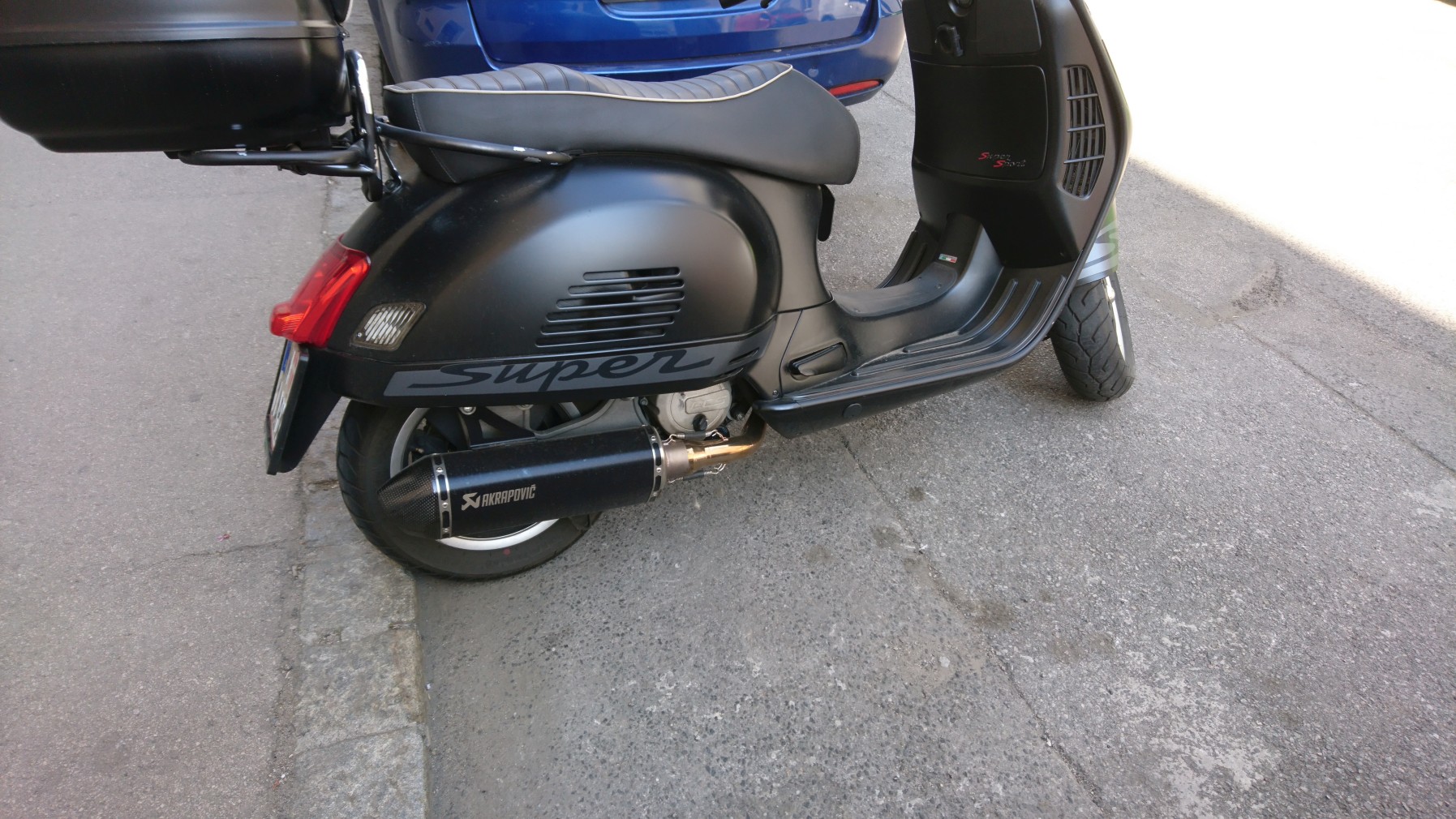 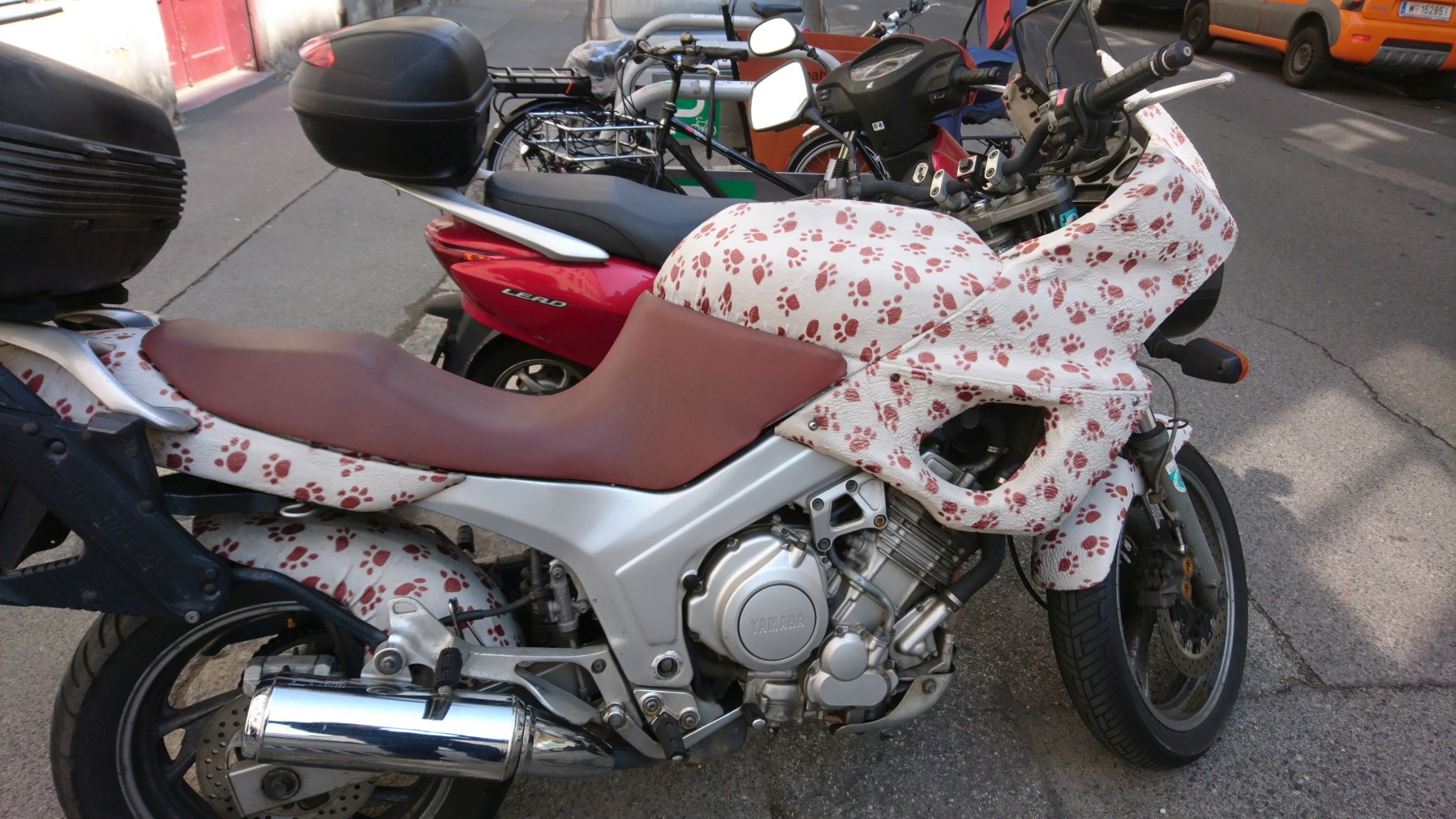 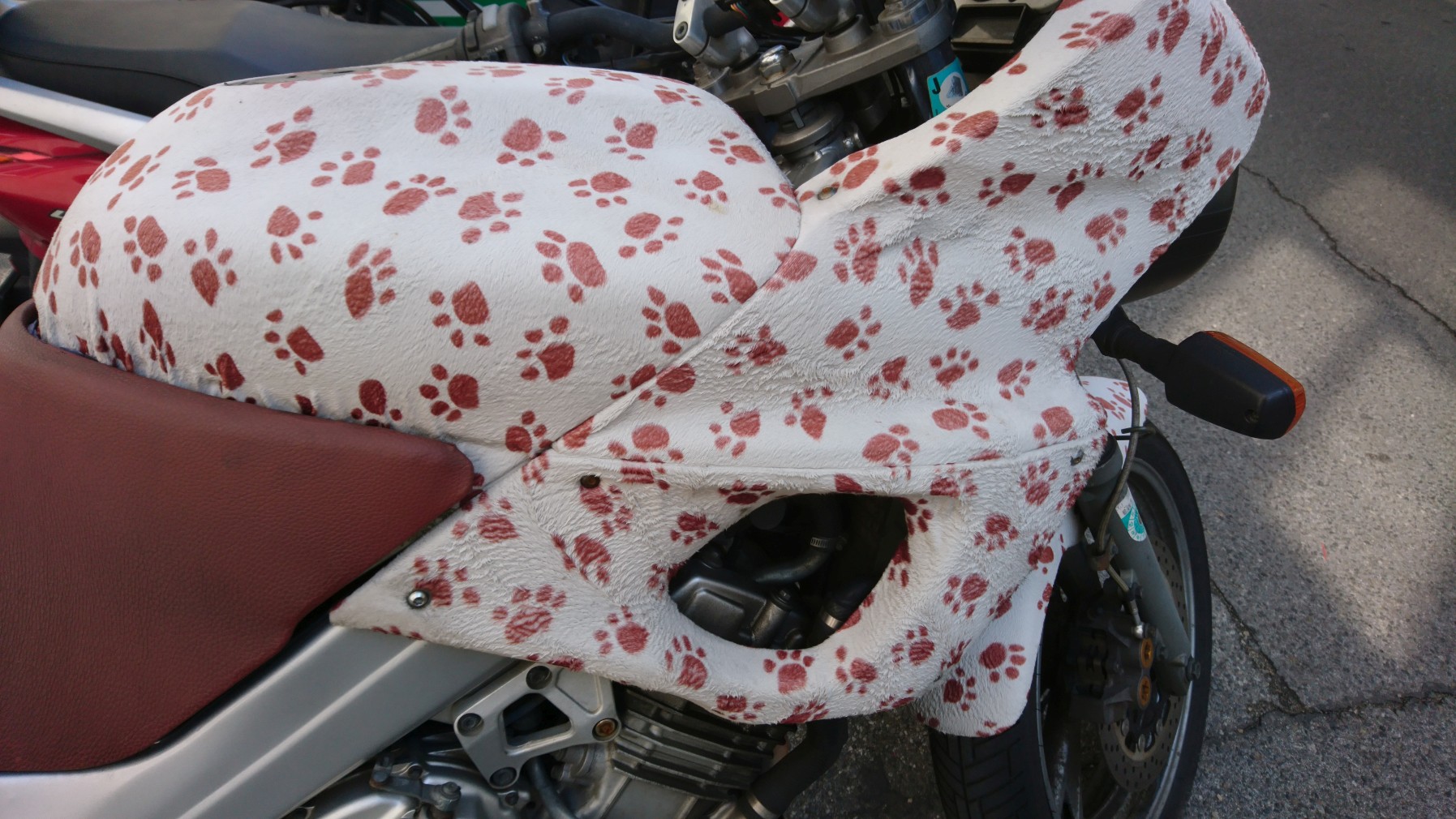 But when I use it with beta15 the screen goes back for a short time and then GPB just exits. Here's my testing.ini:
Code Select Expand
[bike]
bike_id = murasama_rc990_03
paint =
rider = modern
helmet = default
helmet_paint =
suit_paint =
riding_style = modern

February 13, 2019, 10:54:22 PM
@PiBoSo: with beta15 in practice mode (offline testing, m_iType is 1 in SPluginsRaceEvent_t), when RaceSession is called I seem to have m_iSession equal to 1, while in the comment of your output plugin code you have:

Tracks / Beta15 has server side option for "no dyn surface" : get rid os all NDS tracks ?

Should we get rid of all the NDC tracks and keep only the DS versions ?
8 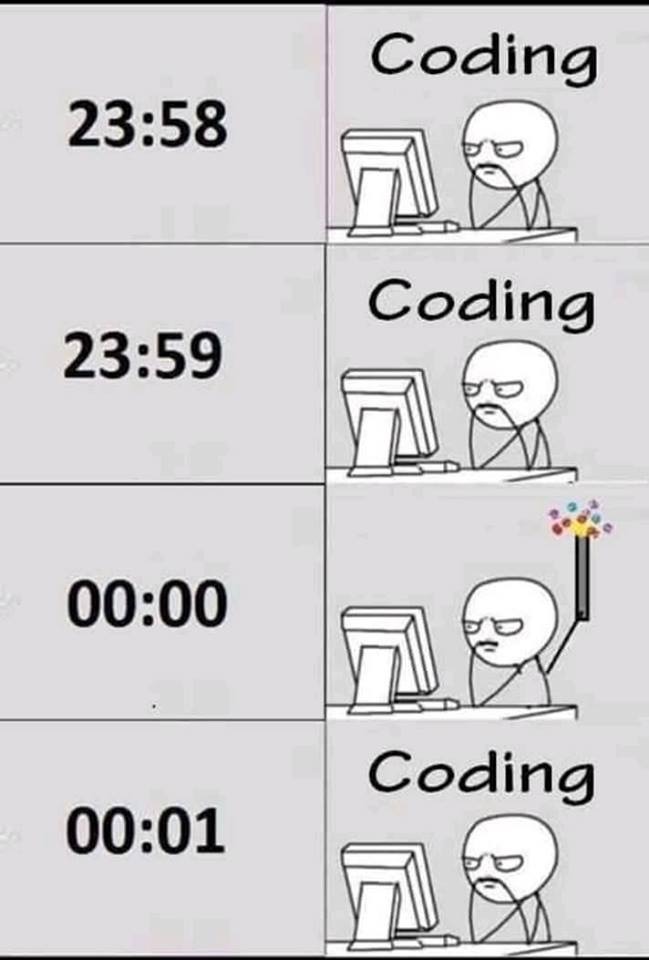 Off Topic / Itching to replace my bike, I tried a couple of recent ones.

But the devil is always around the corner, and this time the corner arrived in the form from a local delaer (well, like 150Km from my place), selling a demo Aprilia Tuono 1100 RR with 1600Km (2018 model, registered June 2018). The Tuono never really convinced me on the paper, mostly due to its look. But worldwide it's probably considered as the the best roadster out there (if you're looking into the extreme category that is) and got this confirmed first hand by some contacts & testers in the bike press world. So, I decided to try one. Big mistake

Saturday morning, roads are wet due to night rain. The garage still allows me to try it (they don't allow to try it if it's raining).
Guy says 30min, I give him a look, and he says OK for 60min, and he starts the 2018 Tuono 1100 Factory.

I don't consider myself a skilled rider, far from that. Had a bike since 2007, but only non-mad stuff (an Hornet 600 and the 100cv cb1000r).
If I had to desrcibe the Tuono with as few chars as possible, I'd say daunting. Maybe even fokin' daunting.
On it, you lose the sensation of speed. You lose your usual references for it.
Starting from a traffic light, you've not yet fully released the clutch and you're already doing 50Kmh. This happens in a 6 meters space.
If you are in 2nd gear and you blink your eyes, you're above 100Kmh and you're asking yourself why all the other vehicles are stopped.
The brakes are from another planet, at least for me. The shifter (up and down) is something you'll never give up once you try one (one that good).

From a practical standpoint, it's a bit of a nightmare: no space at all under the saddle, non fuel gauge (?), it was only 18 degrees but in the traffic the bike was already roasting my left thigh (guess that will be a problem in summer here, usually 30+ for 2 months min).

I didn't push the bike at all (even for my noobish level) because I was not comfortable/accustomed on it (and because the road was very wet). Question is: do I want to get accustomed to it ?
Anyway, I give it back, jump on my cb1000r (which now of course feels like an elephant with arthritis) and head for my local honda dealer to try a new (2018) cb1000r.

Funky looking bike the new cb1000r: not a big fan of the cafe racer stuff but have to admit that when you see one in front of you, the build quality is just of another level, even for Honda. And it has 140cv, so shouldn't be exactly a slug.

I jump on one that has a shifet (up and down) and an arrow exhaust (without db killer).
First impression: it feels like a toy. Not because it is a toy, probably because its lighter than my own cb1000r (which is good) and because it feels shorter than both my bike and the Tuono (but the three has the exact same wheelbase, down to the mm).
What strikes me immediately is that I instantly feel at ease on it and hence I feel I can push it more on the same road I tried the Tuono on (but to be honest, the road is now less wet than before). The sound is unimpressing (even with the arrow), but the bike is very agile, engine revs all good, the quickshifter is a joy to use (gear up it's almost seamless, gear down it works much better than I thought).

From a practical point of view, it's way less radical: some space under the saddle, it doesn't roast you legs and ass, you're sitting upright (wrists tend to like that).

In the end, the 'almost new' Tuono would cost me as much as the new cb1000r. So now I'm left with a dilemma: I'm 45 with family and kids, so the cb1000r (which I think is plenty fast and fun) is a match. But the Tuono ... how to say it ... the idea of twisting the throttle just a bit (it's short) in the underground parking of my workplace and have the whole building shaking ...

July 17, 2018, 08:29:42 AM
This post is to thank all the ones that, probably under the effect of alcohol and/or drugs, decided to donate something to support the various tools I occasionally spend some time on (MaxHUD, MaxSCL, MaxTM), no matter if you come from GPB / WRS / MXB / KRP forum.

Still pondering if I'll use the money for a totally unreasonable purchase (that 1290 SDR is really looking at me) or if something less life-threatening would be more appropriate.

[UPDATE: I went for the life-threatening option and bought a 2018 Aprilia Tuono v4 1100 rr. Not that the donations paid for a significant share of it, but let's say you all contributed

Tried to guess your forum nicks from paypal names when possible, left just your name + initial when not sure.
If you need to replace your name+initial with your forum nick or if for whichever reason you'd prefer not to appear here, just let me know (PM).

The problem seems to be related to the number of tracks: up to a certain number of tracks, all tracks have their image correctly shown. Above that number, the tracks at the end of the list will not have the image (while the ones at the top will).

I doesn't matter if the tracks are under the gpb folder, under the "mods" folder or split between the two.

Not at that price (45E), but looks plenty of fun

Off Topic / OpenGL and MacOS: EOF

I didn't try that personally but it may be of interest for people without a sound card with decent virtualization for headphones.

I kind of stumbled on this when looking into the Sennheiser GSX 1000. I have an old sound blaster that supports CMSS3D and does a very nice job, but he sennheiser thingy looks very nice, is driverless and more handy and seems to be on par in terms of audio quality (maybe even less noisy as it's external.

I'm unsure how well this would work with PiBoSo's games, but I guess that OpenAL will see a 5.1 or 7.1 output device and output sound accordingly (i.e. with positional clues). That will then go into the software virtualization of your choice and give you nice positional sound into your headphones.

The other solution I posted about a while ago (using OpenAL_Soft instead of OpenAL, and plugging in one HRTF) looks more elegant to me and may be better overall, but with this one you can use some of the best rated virtualization stuff (Creative CMSS-3D, Sennheiser's one in the GSX) for games not using OpenAL.

P.S.
Some info on binaural sound: https://www.youtube.com/watch?v=Xb6dMYkc6r8 (only works with headphones, and if you have sound virtualization devices, you have to turn the virtualization off for the example in the video to work).

February 11, 2018, 09:42:30 AM
The number of people that forget to download tyres and hence have troubles is huge.
Would it be possible for GPB to display a warning when the tyre files are missing ?
It would solve a lot of issues.

TC bit works fine, AW bit too (even if the AW itself is just horrible on high levels: it fires even while leaning a lot ...).
20