I have been thinking lately about what the holdbacks of using a gamepad when driving motorcycle games.

Of course there are advanced solutions like my Force feedback M302 controller for Direct Steer (countersteering mode), or DD's HS controllers for normal steering. Those can not really be compared to a gamepad neither in price nor experience.

It is quite a big step between all those right now.

Maggikk made a great little bolt-on force feedback unit for the gamepad which looks really promising, but I'm not sure how the progress is right now.

What would the features be of your perfect gamepad?

- Better resolution in the steering axis?
- Gyro functionality? (I have been experimenting with this some.. Could be something!)
- Better brake controls?

Tell me your dreams!

The track with the cool name, sweeping turns and big climbs&drops.

Never been to this one, but it is now on the bucket list! Conversion from Derdumeklemmer

If you have feedback, please write here or join my Discord:
Discord Invite

You cannot see attachments on this board.

Feedback:
Write here, or join the party at my Discord server!

Also tried mapping the bike lean, and it works rather well actually! Very Arcade, but fun nonetheless. (about half way into the video)

June 23, 2020, 04:36:07 AM
Kinnekulle Ring
You cannot see attachments on this board.
A small track with sweeping curves. Really awards smoothness rather than aggression.

A conversion from rfactor, author DerDumeklemmer


Thanks to Matty for all the help!

Feedback and stuff? Join on Discord:

A conversion based on Driftweekends AC track


Thanks to Matty for all the help!

Also thank you to you guys who helped test the track


I hope you enjoy it!

Feedback and stuff? Join on Discord:

September 15, 2019, 07:55:07 PM
My ffb controller is in parts again awaiting a level up.
So it has been too long since I played gpb.. Decided to go buy a gamepad so I can at least play.
I thought direct steer was excessively difficult, but this was almost worse! 😂
I can't believe how you guys can be so fast!
8

This is going to be a monster post describing my ongoing project of making a controller.
The idea is to keep it low budget and open source but maximum fun!
It's gonna be a long one.
Get ready, here comes the blabla:

I recently bought my father a force feedback wheel as a retirement present. It was loads of fun!
But it got me thinking about simulators, or more so the absence of them in motorcycle games.
Why is there no game that implements proper counter steering? (This was before I found GPB)
How hard can it be to make a proper controller?
I started contacting companies (Milestone, Jester, etc) that I knew were making cool arcade motorcycle games.
They were not very interested in my questions and suggestions.
Then I stumbled on to Gp bikes. Love at first sight.. Then I tried direct steering, and wow!
I hated it! What a horrible horrible function! I was using a PlayStation controller at the time, and it was ridiculously impossible.
So, I decided to make my own controller.
Enter MCCC! (Motorcycle countersteer controller) (CCC in Roman numbers =300) So,
The magnificent M300!!

I knew I wanted it to be based on torque input. That's the only way I could think of that could be realistic.
At first I thought about a static bar with pressure sensitive resistors plugged into a ps3 controller,
but a static bar just felt wrong. I thought I'd add an adjustable spring resistance that would change
with acceleration and lean. I would also need two inputs to act as one axis. I thought r1/r2 button
did this, since they are the Z-axis, but it didn't work out.
So, scrapped the M300..

Then I found the Arduino Leonardo which seemed to be the answer to all my questions (except the two-outputs-one-input-problem).

This time I actually built something. A few pieces of wood, an old RC radio and some crashed clip-ons from my old Triumph.
I connected the brake handle (bicycle style handles) to one of the potentiometers and some springs and thread from the
"handlebars" to the other one for steering (until I could figure out the torque thing). Then I took an old throttle handle
and cramped a potentiometer into the end of the right clip-on and connected it to the handle. A little tinkering, zip-ties
and a spring later, I had a working throttle handle!
Loaded The Arduino with a ffb wheel program and actually got the steering, brake and throttle working!
On the "wrong" axis and of course no ffb, sure, but it worked fine in gpb! 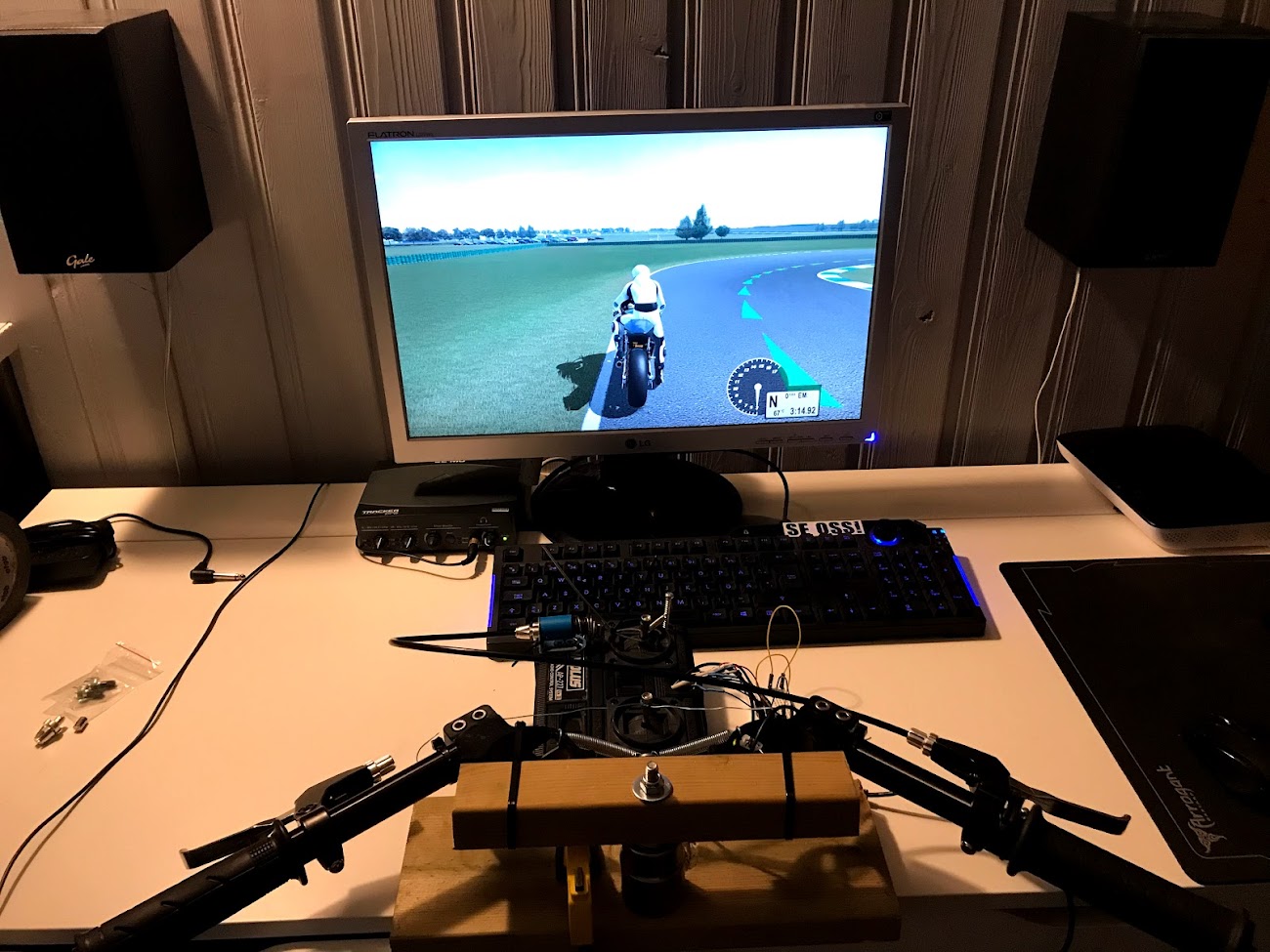 Activated Directsteer again, and WOW!! It was horrible!! Still completely impossible..
So I started over..

Now I bought two load cells which I connected together in a way that any respectable engineer would frown upon.
Got them working against each other and amplified the voltage difference between them with an op-amp. 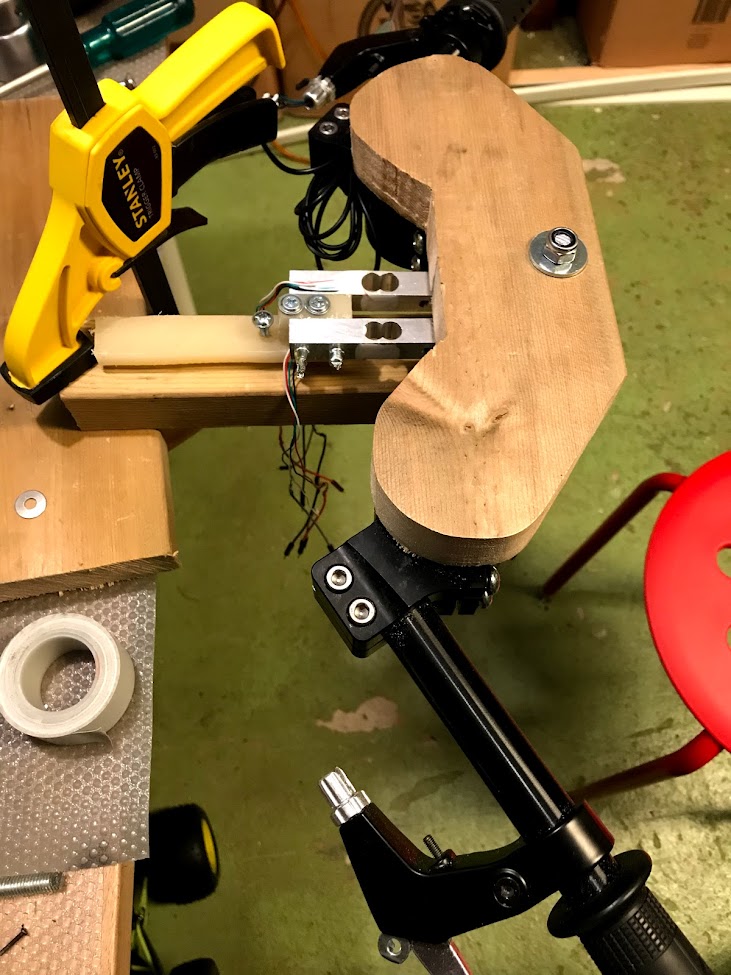 After many hours studying and testing I got them working perfectly, just the way I wanted! I used the now
spare potentiometer from the old steering for the clutch handle. Worked perfect!
Plugged it all in and tried it with GPBikes.. Guess what!? It was still horribly horrible!
At this point I was quite ready to give up.

Then I saw Marcel's Mixed Reality video where he put a handlebar on his Fanatec wheel base,
and it looked awesome! I didn't know Piboso had implemented ffb in such a good way!
Sure, it has its bugs on rough surfaces, but wow!

This made me go out and buy a cheap second hand Logitech Driving Force GT wheel to see what
I could do with it. If it worked, I will make my own more powerful ffb base.
I took the M300 apart again and turned the Logitech around and tilted it (as in the picture)
and strapped the remains of the M300 to it. I took the load cells from the steering and used
one for the front brake. Great feeling! 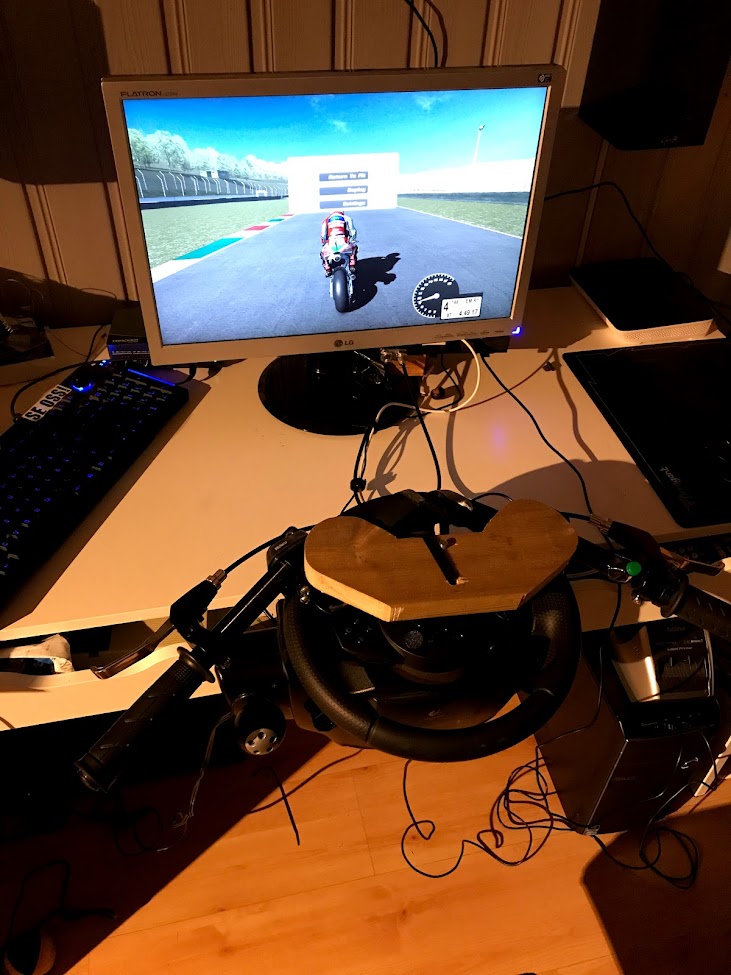 And WOOW! It actually works surprisingly well!! I still have to tweak the settings a lot, but for proof of concept,
I am more than content!! You can really "feel the road" in the handlebars, and the counter steering is surprisingly
intuitive! (Still difficult as h*ll though)

So, I'm still investigating what solution will be best for my new base. A stepper motor with supreme torque and
holding torque is probably the way to go, but I'm not sure how it works with the available open source Arduino
force feedback sketches. Probably not very well without a quite expensive motor driver.. I'm probably gonna try
a largeish DC motor and gear it. Bang/buck ratio is probably hard to beat. I'm thinking, since I don't really
need 900 degreed turning (more like 50), I can gear it with belt and pulleys and get a lot of torque per ampere.

A side project while working on this was my little lean seat. The A.S.S.-unit (Arduino Seat Sensor )
I put switches that monitored if I had my weight to the center, left or right and I got the rider to lean
accordingly in the game. It was cool that I got it working, but it just didn't feel natural at all.
Got the tip from passerby to use head tracking instead. So I got my ps3 cam out and soldered myself
a 3 diode race hat! Using Opentrack I can now move the rider by moving my head. That is some next level stuff!
And it feels much more immersive (close to falling off my chair). 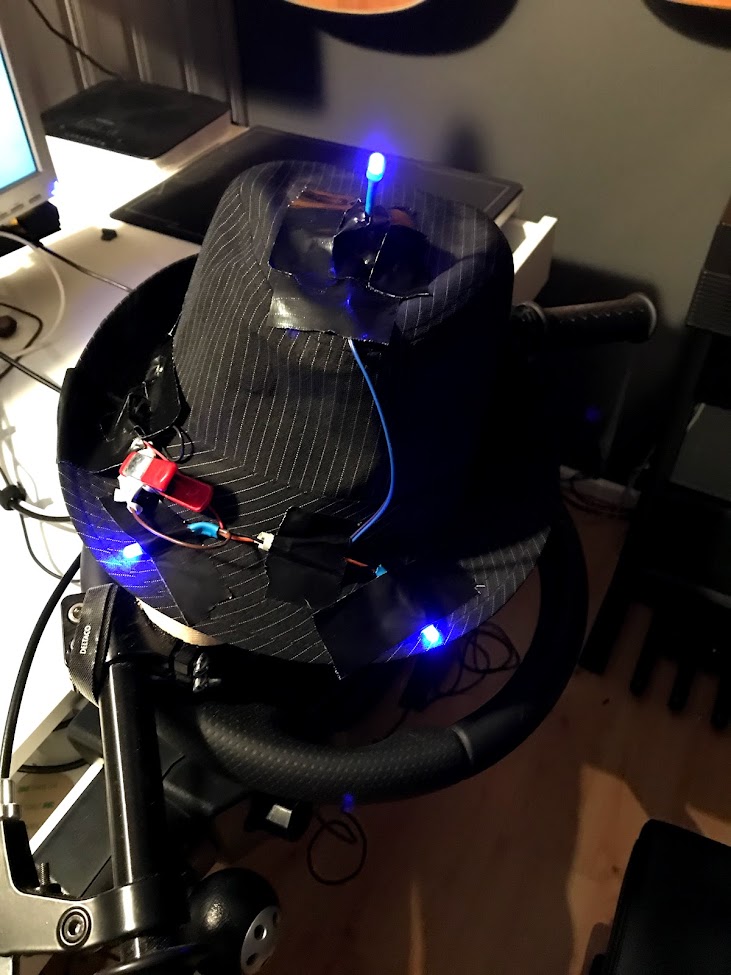 Having a spare load cell I just had to build foot controls as well! Took an old set of foot pegs from my Cbr and connected
switches to the gear side and load cell to the brake side. 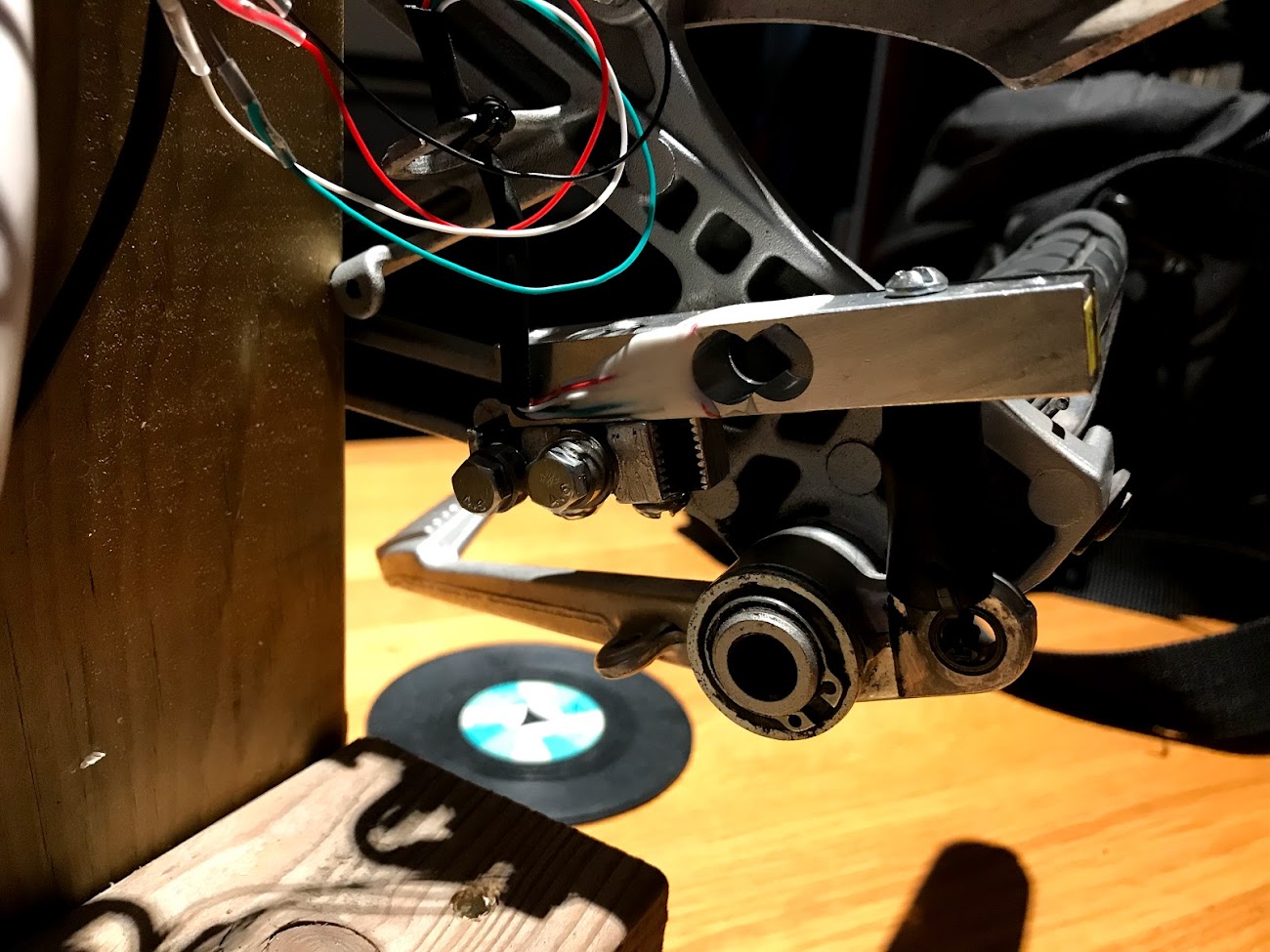 It's really nice having a proper shifter! 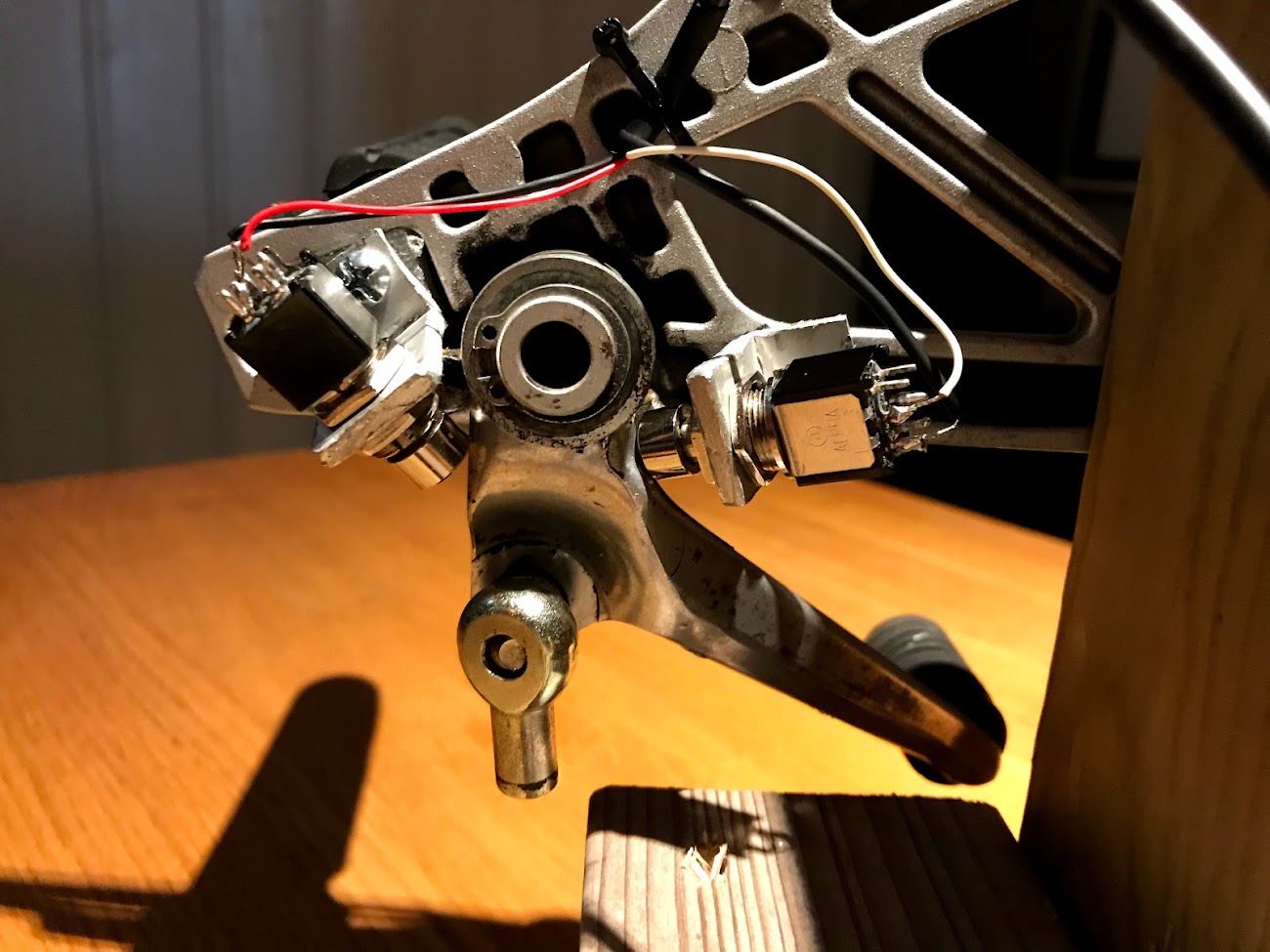 It contributes greatly to the overall feeling. 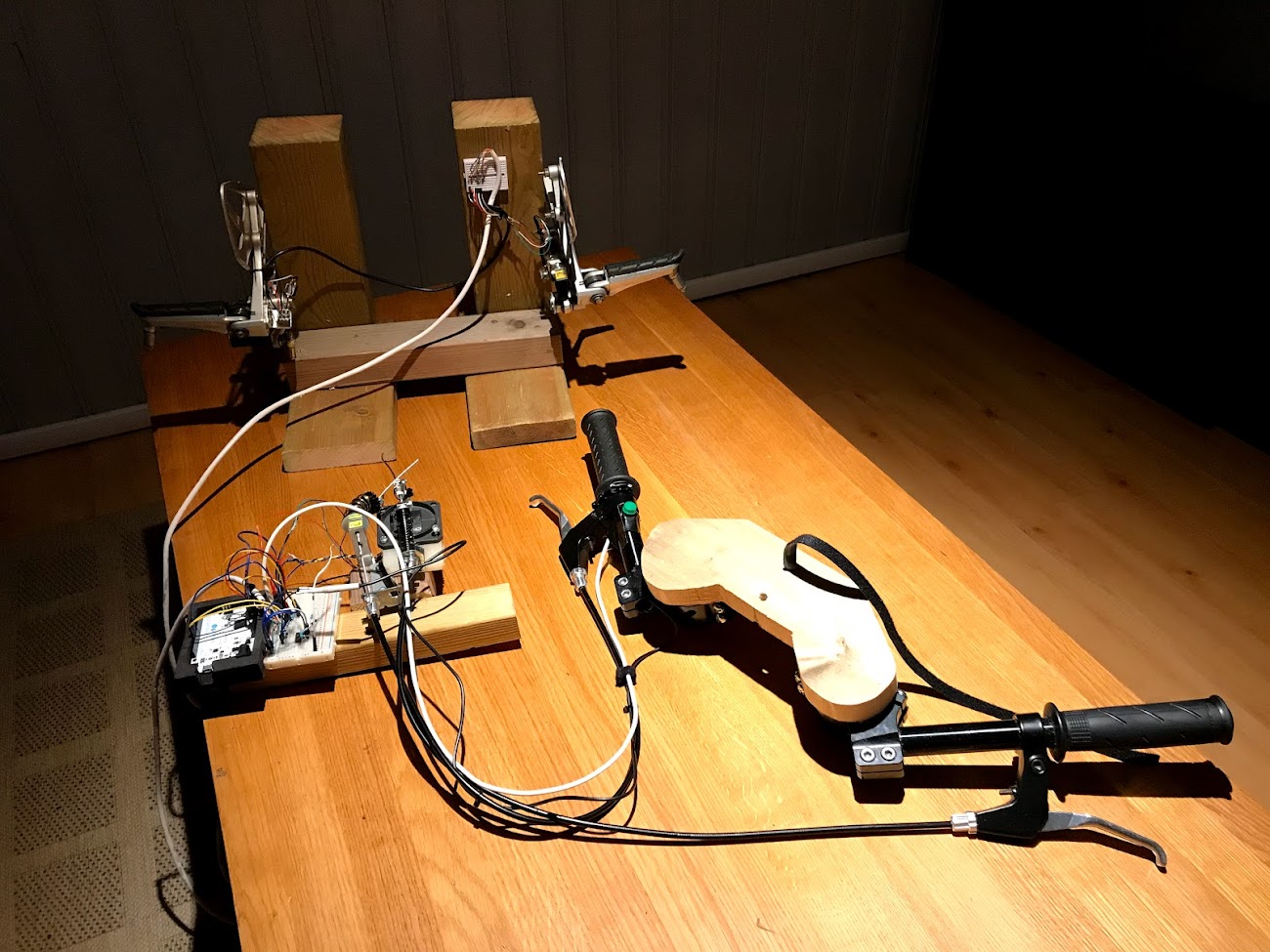 That is pretty much where I am today.

What's on the workbench right now is:

- Converting the race hat to IR leds instead of blue ones

- Making haptic feedback knee sliders (so that you get some indication before you fall off in direct steer mode) First prototype is done! They're lying there waiting for serial data to arrive.. I'm thinking of ways to make them wireless, there will be enough cables on this thing as it is.. 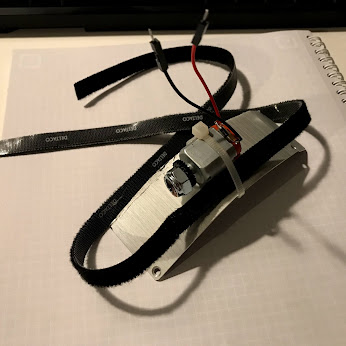 - Making the .dlo plugin for gpb send serial data to The Arduino to control the knee sliders (to begin with)

- Constructing a prototype ffb base

- Making it all look good (Knowing myself, it is unlikely I will take the time to do that..

I'll keep updating with my progress!
9

Would be cool to get a race or training session going for DS!
10

April 27, 2019, 09:41:11 PM
I'm making haptic feedback "knee pucks" and it seems that different bikes have different lean limits when the knee drag sound is played, so instead of setting a fixed lean angle I would like to be able to map them to a "knee drag" value (0 = no knee drag, 1-255 linear increase) in the .dlo
11

April 20, 2019, 05:05:06 AM
Hey guys!
I downloaded a few bike mods and put them into all the right folders I think (tyres and such). They are selectable in-game (they take some time to load though, normal?) and I can take them to the track, but they run like somebody put diesel in them?! If I roll on the throttle, it makes strange choppy sounds and the bike is pretty much unrideable.
Is there something I'm missing?

I'm running a Logitech wheel for steering and a custom Arduino Leonardo for clutch, gas and front brake.