Just wondered if anyone's had this before.

It all looks like it runs well, and gets to ending log, but the file isn't updated, and if no file exists to overwrite one isn't created.

Any ideas what could have suddenly gone wrong  or is anyone else finding this? Any ideas for a fix?

April 17, 2017, 06:42:16 PM
Does anyone fancy creating and maintaining a thread for people to upload track assets for others to use?

I know there was a mention of this briefly in another thread and I said I'd maintain one over on MXB so I did just that:

It's only been up a day but hopefully it will soon fill up. Anything posted on MXB can be copied and posted here and vice versa.

What do you guys think?
3

December 30, 2016, 11:27:29 AM
I'll use this thread to update the status of the rally stage I'm working on. I'll also add some basic information / tips for anyone else who might want to try my method. This wont be a tutorial, so anyone wanting to use this method will need a basic understanding of Blender, or the ability to take these methods and use them with another 3d program.

The theme for this first stage is going to be English countryside with both tarmac and dirt roads, junctions and small jumps, with a couple of small woodland areas. So far I have a basic layout with a couple of tarmac loops with junctions, and a dirt track around / in between. This will allow me to make multiple layouts, perhaps 5 - 6 different stages within the same map. Although I know this doesn't look like a typical point A to B rally stage, it's the best way of getting as much road as possible squeezed into the space of the heightmap square.

An idea of how the layout will look: 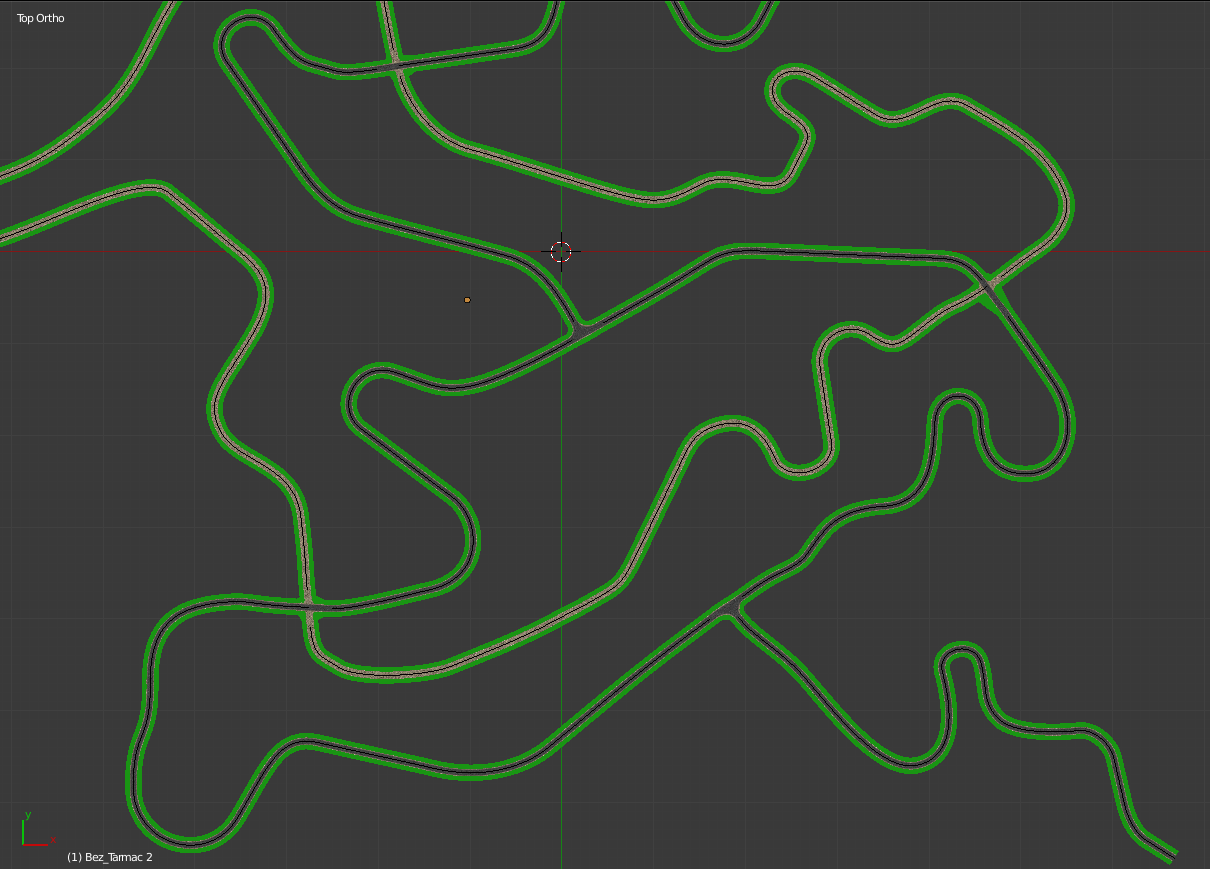 Next, using Bezier curves and the Array modifier I was able to roughly lay out my roads. Each road consists of a tile, with enough geometry to give a nice curve and allow for some deviation in the surface to give the road a nice rough feel while driving. The green area around the road is another tile that uses the same Bezier curve and Array modifier as the road, but this time used as more of a holder for the road object to ensure the road has enough ground either side of it, and doesn't have any terrain sticking up through the surface. As this will be used in conjunction with the terrain to carve away / add to it, I've named them 'deform' sections.

The other beautiful thing about these deform sections, as they're only going to be used to shape the heightmap, they don't have to conform to 3d standards.. Ngons everywhere! 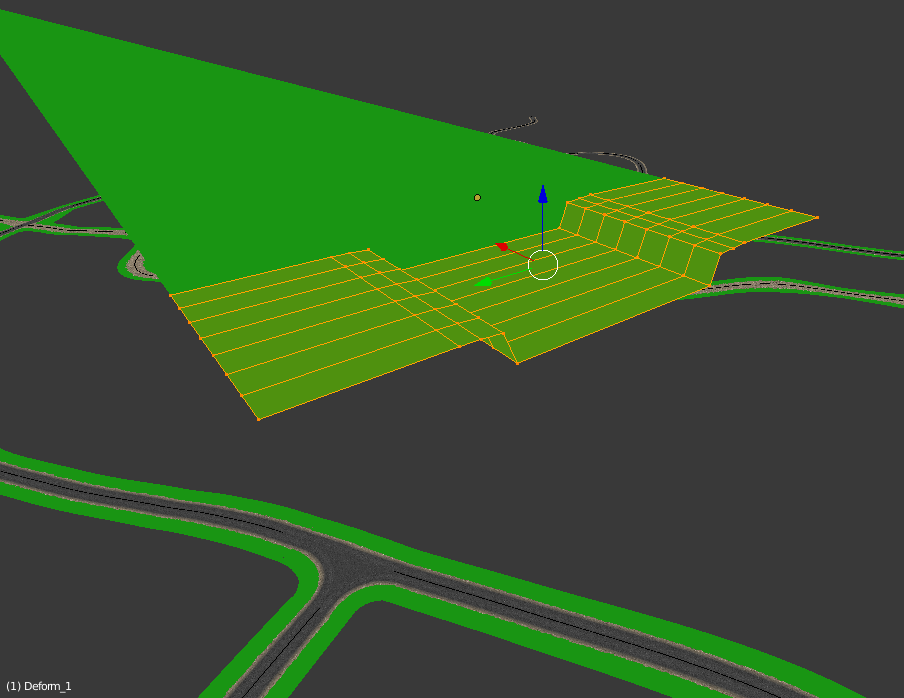 The junctions have all had to be hand made, including the green deform pieces for each junction, as you can't join Bezier curves in that sense. But the neat thing is once the junctions are in place you can lock the ends of the Bezier curve using 'Bounds Clamp' and 'Stretch' in the curve properties and then shape the in between sections how you want, leaving the connecting junctions connected and in tact. 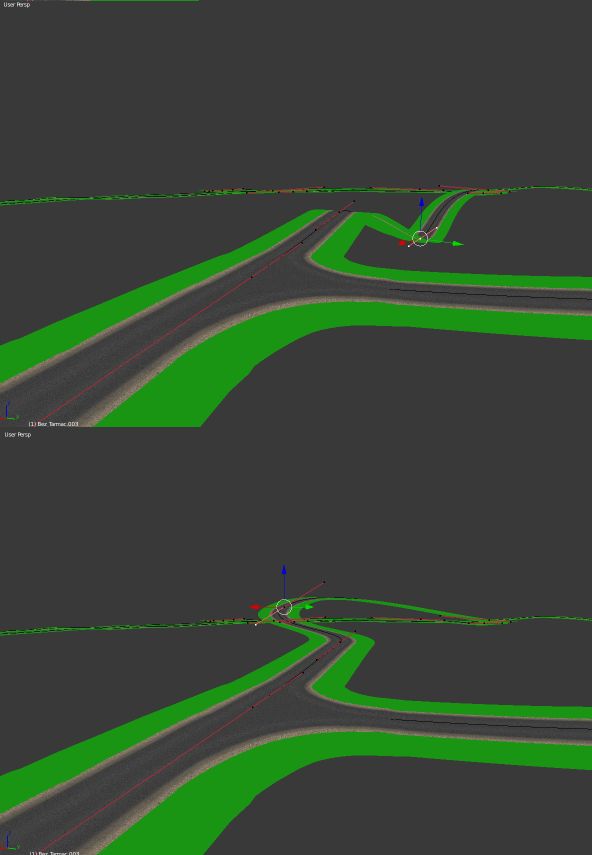 The basics of the method are that you use the Shrinkwrap modifier to lay the Bezier curves on the terrain below, you then move the green deform parts to another layer, and you then use the Shrinkwrap modifier on the terrain targeting the green deform parts, leaving you with a nice road and nice ground mesh that has cutouts to make room for the road pieces. 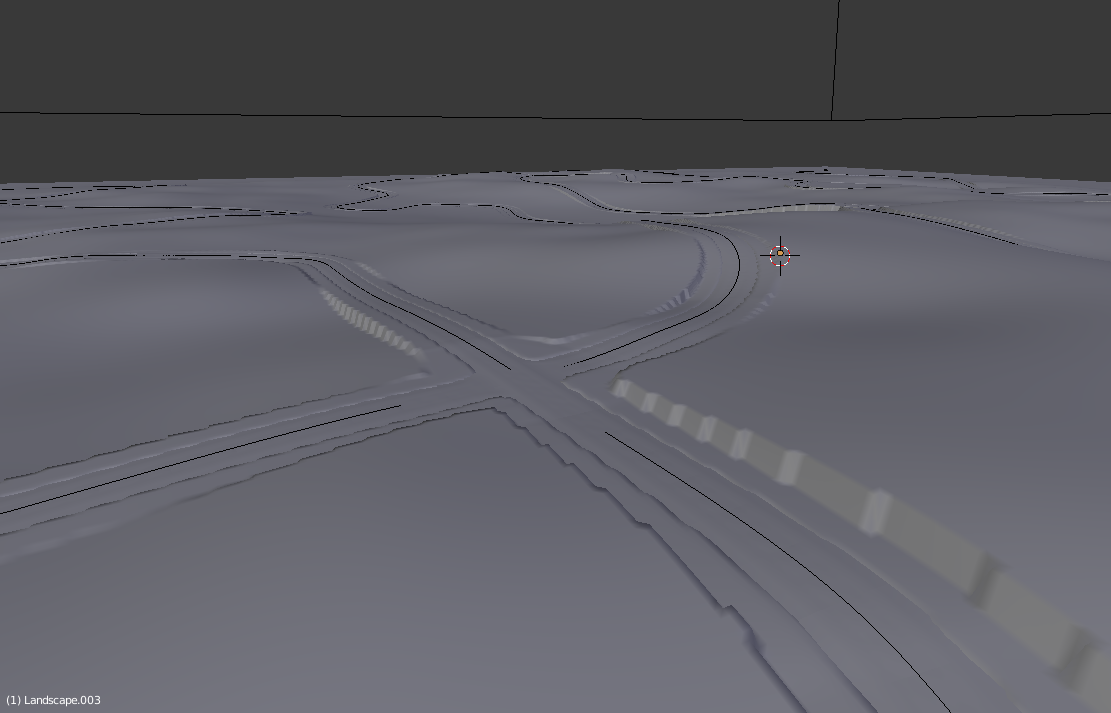 That's all for now, once I reach the stage where I am ready to export I will cover the basics of rendering out the heightmap, and the road objects.

Are there any other surfaces usable for WRS other than those listed on the track creation rules page?

I could see it working as something you set up in TrackEd, possibly with the ability to add a sort of checkpoint line across the centerline, which when driven through would trigger a graphic up on the screen in game under the mirror with an image like a hard corner, medium corner, crest, jump, no cut corner etc..

If this is possible, it would also be great to be able to add sound files to tracks that are triggered by the pacenotes, we could then either record our own co driver voice for each pacenote or use downloaded samples or samples from other rally sims. There could then be a choice in the settings to drive with either visual, audiable, both or no pacenotes.

If this isn't something you want to add (PiBoSo) would it be possible to mod this? For example, is this potentially something MaX could code in as a plugin?

Suggestions and wishlist / Point to point

I think I remember seeing this mentioned somewhere but for the life of me I can't find it.

Is it possible, or will it soon be possible to make tracks for WRS that aren't a circuit, but instead a point to point I.e rally, baja, and enduro for mxb?

Nearly finished a big project for MXB and would like to change things up from the default look..

I could make a new skydome, as I've done before, but I found it a lot of work to get just right and the project I'm doing at the moment has already taken many weeks between two of us

Has anyone got any nice skydomes they could let me use? Full credit given of course. Ideally looking for sunny with clouds, from what I've seen on YouTube the Jerez clear skydome looks like the kind of thing I'm after.

I don't own GPB though so haven't tried any tracks.

First off, sorry if this is in the wrong section, there is no 'Track editing' forum here as there is over on the MXB board. Please move the topic if it needs to be put in the right place. I would ask this question over on the MXB board but there are only a few track makers currently, none of which use Blender to my knowledge and PiBoSo just said "it should work"..

I'm using a simple plane as the floor for some off track scenery, and using the SHAD prefix in Blenders outliner (object name is SHAD_plane for example) I can't seem to get shadows to show up off track. All I have on the plane are trees, and these are duplicates of what I'm using on the track and on the heightmap they do generate shadows so I don't think it's a problem with the them..

I've recently taught myself Blender by making a custom bike, and so far it's great for track scenery.. I've had the SHAD prefix working just fine before when I used SketchUp for previous tracks, and the only difference I can see there is that every plane in SU is treated as double sided, whereas in Blender there is no such thing as a two sided face.

Any tricks I should put in to practice in Blender? Anyone have this working? Would love to know how! Thanks

So in anticipation of MX Bikes beta 4 here.. And as a track maker the one thing I've found to be a huge visual let down are 2d trees as for some reason I can't seem to avoid the alpha bleeding / z-buffer / sort order / alpha halo around the edges of the texture on certain faces. Up close it's not a huge problem but the further away you get you have white trees if they're too detailed.. I'm sure you've all seen it, also affecting PiBoSo's very own 3d grass..

My question is, on the daily development thread a while back for all sims was something along the lines of 'Improved Alpha Mip Mapping' and some stuff about 3d grass. I've seen a few videos online recently specifically Soramame Speed Park where there seems to be no apparent problem with the trees. Now I'm fairly sure this track is a couple of years old, so either GPB beta 7 or 7b fixed it or it's being remade, or this track never had that problem, and if so how?

Any ideas welcome, if the latest changes have fixed it in GPB then I'll be even more excited for MXB beta 4 as I have a few tracks that lacking good trees I'm reluctant to finish.