But what I want to know is how can I assign one throttle map to one specific ENGN file?

So have one map for one engine mode,
Then another for a different mode, and so on and so on.

And when, in game, I change from say a Q mode to an R2 mode, am I changing the throttle mappings or the engine mappings, or both, and how does the sim figure out which?
2

Support / Re: clutch mapping in .cfg

I've seen a few mods that have different mappings and was wondering what the difference is?
4

Media / Re: GPB screenshots (Unretouched, no editing at all) 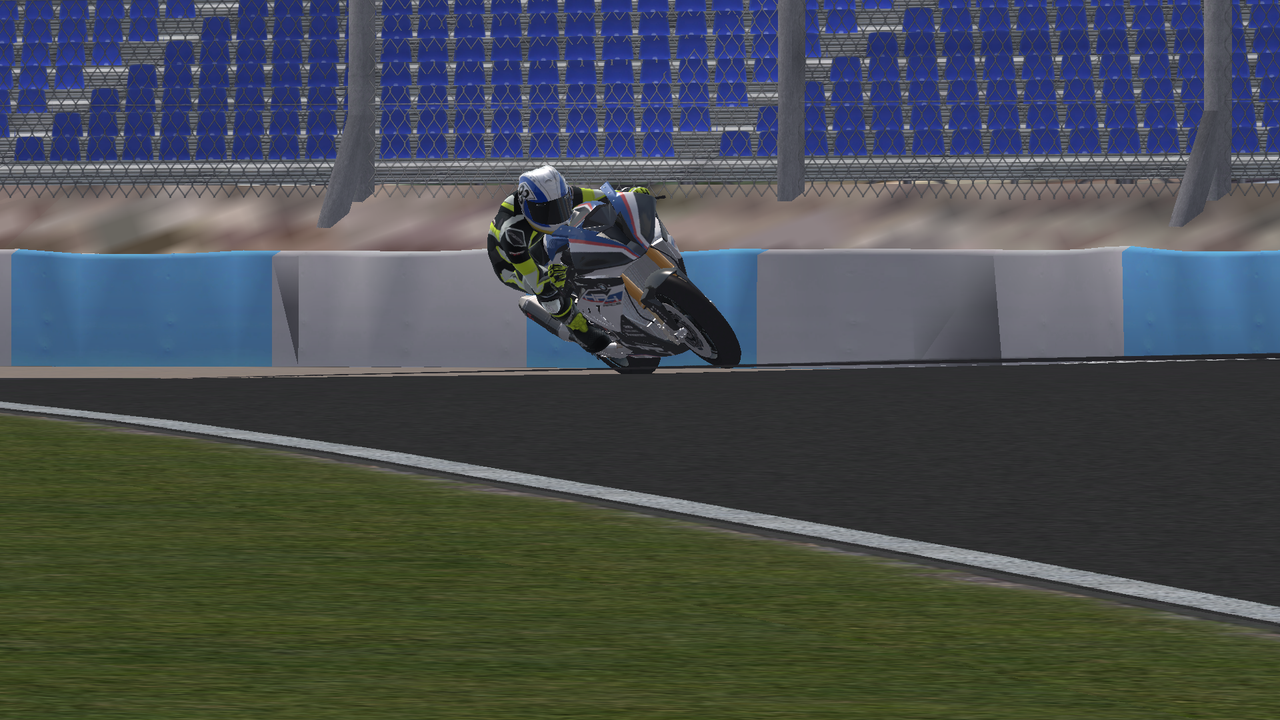 January 21, 2020, 11:22:45 pm
When the next beta drops, the final pre-season test and start of the championship will be organised, providing the online stability is up to scratch
7

A compilation of track side shots with my WIP BMW HP4 Race mod for GP Bikes.

This is Very early pre-alpha, so this is all subject to change.

The possible changes include but are not limited to:

-Sounds are placeholders, and the engine is un-tuned.
-Dash is non-existent.
-Front Tyre overheats after a Lap.
-Riders limbs not 100% lined up.
-Minor handling Tweaks
-Shader's tuning
-Launch Control integration

Other than that its going well.

Physics are nearly done, handles quite well. Can be crashed, but overall forgiving, as the HP4 Race should be, according to reviews.
10

Media / Re: GPB screenshots (Unretouched, no editing at all) I didn't really realise how expensive this thing was, it being a Christmas present and all. But we'll with it imo
12

January 17, 2020, 05:56:48 pm
I wasn't comparing skills of modern an past, I just used it as a way of trying to get a point across, using a time you're clearly more comfortable talking in.

What I was trying to say, is that a rider who doesn't have as precise of a throttle control, but is good at setting the bike up with the electronics can close the gap to a very naturally gifted rider.

This naturally gifted rider may even be running electronics, but if it's set up is slightly out, it can be more of a handicap than an aid.

That's why I deem it a skill, as the set ups for these electronics have to be so precise, translating rider feedback into the graphs, and then translating all those into a physical change that benefits the motorcycle to a degree of precision that we can't even comprehend.

To me that judgement and level of interpretation is a skill required of a modern Grand Prix Rider. Sure it may not be THE skill so to speak, but anyone who can master this, and then ride at a decent pace, is deserving.

GP Bikes setup screen is just enough for me. I did try maxTM to setup my bikes. It is a cool app, but my brain was just going blank 😂


As for KS, he himself has admitted that WR was better at setups, and that the Suzuki always had some sort of setup issue, up until about '93, which, WR remarked was a different KS. (He started to adopt WRs approach and became more consistent)


All this is in the book by Mat Oxely called, rather hilariously considering the topic of talk we're in,
'An Age Of Superheroes: A time before traction control'

If you haven't picked it up, I strongly recommend you do, it's right up your street. Season reviews from '89 to '93 with behind the scenes interviews with all the main protagonists and a lot of in depth talk about things going on. On and off track. Like when Wayne gardener parked his mirrored motorhome across from the Suzuki pit and then the HRC staff went inside and used it as cover to take pictures of the RGV without fairings on. (Once honda overlayed the pics in their bike they found that they had the engine too low which was affecting handling btw)

I do believe if they were in the same machinery Schwantz would have had more titles, and would have been more successful. Be won more races than rainey over the same period, which should say it all really.

He either had mechanicals or crashes due to deficiencies in the bike or setup. But rainey was second or third when he didn't win most of the time
13

January 17, 2020, 11:14:42 am
To put the rider skills in something I expect you'll have an opinion on, I believe Kevin Schwantz was a 10x better rider than rainey, he just lacked the ability to set the bike up when compared to Rainey.

Rainey had the best understand of the bikes behaviour, the telemetry, he was receiving on the data logger, and how to go quick to the bikes strengths. He used this to make up with the speed and what your saying is the rider skill deficiency compared to KS.

Which further shows Schwantz ability to ride around issues, and the ability of Rainey to set the bike up.
If they started on the same equipment, I believe Rainey wouldn't have been champion. Certainly not 3 times.

The result of his knowledge of setup was Rainey getting three WC compared to Schwantz 1, despite him being arguably the worse rider.

As I've already said various times now, setting the electronics up to get the most out of the bike is a skill in itself, so, while it may mean there is slightly less of a focus on throttle control,

(there still is quite a large focus on it as there is a huge misconception on how good go electronics actually are... It's reported that the new S1000RR electronics are 'better' and can do more than the Magneti marelli gp ones, not saying mmnis bad, but still not quite as good as people think)

...slightly less focus on throttle control, but more focus on being able to understand the bike and the electronics.

You can ride around the electronics, Marc Marquez is famous for this, as he under-rotates the rear wheel using the rear brake,to overcome the Honda's engine braking, which is a known issue with the Honda's.

So in that regard understanding what's going on and adapting to the electronics is just today's version of adapting to suspension deficiencies.

In short, no I don't agree with the fact it's unfair, as obviously the second rider is able to make up for a potential lack of talent using setup, and therefore, the first rider is obviously lacking in that area, as well as their ability to read the bike and set it up correctly.

F1 teams have a committee to suggest and implement rule changes. It was more powerful before with Bernie 'in charge' as they believed he didn't know what he was doing with modern technology. (Rightly so as well)

As for Brawn, a former, legendary designer of highly successful modern cars, there is more trust there, that he'll do right by F1 so they feel there is less need to intervene.

I will say, that F1s needs are different drastically to MotoGP, both in terms of fan base, tech, and how they actually get their speed, so there are different decisions to be decided.

Also, the 2 stroke in F1 thread, that was being looked into by the teams I believe, and I think it was even suggested by a team. So was the halo.

They still have some substantial control. Even if they don't make it as public.

I will also say, I haven't watched an F1 race since the halo was introduced, and since I got access to bt sport and MotoGP.

As for it being manually driven, I don't believe that for a second. The f1 cars have adaptive electronics in themselves that is constantly learning and changing to get the most out of all it's systems. It can be overridden with stuff like the over take buttons etc but it's still not near a manually driven car.

If you want to watch some good open wheel, equal fair racing in full manually operated cars, watch indycar.Its 10x better, and the racing is better too.

Bias decisions are everywhere, look at dorna and mm93. Rossi hit him and got a grid penalty. Fensti grabbed manzis brake and got a ban.

Mm93 being the Spanish guy he is has done much worse, more often, and most I've seen is at Argentina with a ride through
15

January 17, 2020, 12:05:38 am
In response to that, a high jumpers clothing is specialised to allow maximum flexibility and support, and the shoes are designed in much the same way. All while being light and comfortable.

But anyway,
I have watched a load of gp 500 races, and I must say, while there are some good ones, I personally don't get as excited about it as modern races (by modern I mean 4 stroke era so 03-present), and the good close races are certainly harder to come by.

And it's not that I hate that era, or am a technology rider assist freak, (I do like computers and so on, and enjoy the data side of gp racing) but this opinion, is just GPs.

When it comes to Superbike and Production based machinery, I'd take a late 80s to late 90s sbk any day over the current shite, but being more of a superbike fan anyway than a GP fan, I guess that's expected.

In reality MotoGP is a sport designed to push the limits of technology, the limits of physics, the limits of the riders, and go as fast as possible, while putting on a show.
This for me is what has currently been achieved. A MotoGP machine should be as fast as a motorcycle can physically go and, the electronics help achieve that. It's not called the 'pinnacle of motorcycle technology' for nothing.

As for how much the teams play in the rules of MotoGP I cannot say, as I've not really looked into it. However I would hazard a guess it's less input than the f1 teams. Now there is a sport where the teams rule.

As for fair play, the rules are the same for everyone. It's about as fair as it can get. Just because the rules aren't what you would pick doesn't make them bad, or incorrect, or kill the sport.

Intact the electronic aids actually make the sport FAIRER as they even out the field, due to their ability to work with theme bike and help remove some problems with the setup/handling. Thus putting the bikes, and by extension the riders, on a more equal playing field, and therefore making it more competitive
Pages1 2 3 ... 76