General Discussion / Can anyone Identify this program?

March 23, 2019, 03:29:04 pm
I've come across a little video online and I was wondering what program the devs in it were using. I only have a few screenshots of the program, and the title bar has been cropped down. 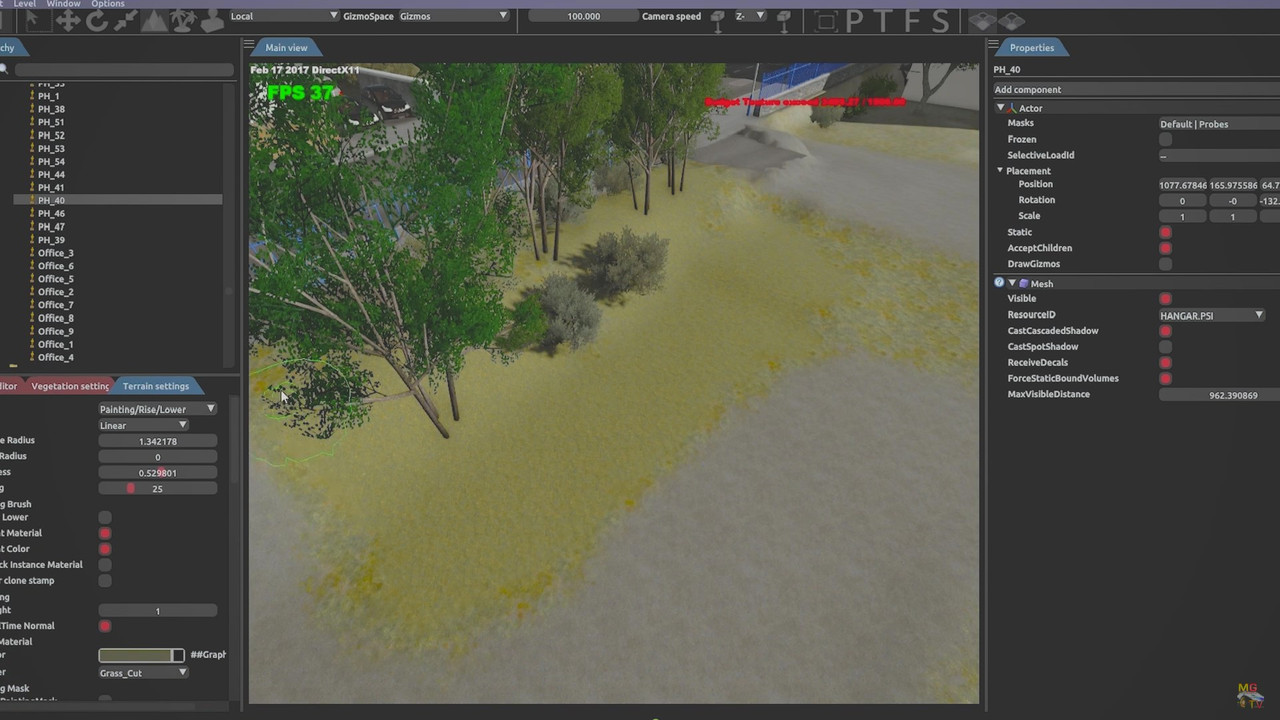 March 17, 2019, 11:05:15 pm
I'd love the ability to hear trainers bikes when running with them, as for me personally the noise of being followed adds a whole new layer to lapping in GPB, and would get newer players used to it before they jump online.
Also the ability to see trainers in replays would be awesome, it would allow for mod packs such as MotoGP packs to be showcased all at the same time on track, and if its combined withe the sounds it could be awesome to see and hear. Especially if it can load separate paints
63

March 16, 2019, 10:33:04 pm
I've recently seen that someone has remade Star Wars Podracer in UE4, and it got me thinking what would it be like if some lovely modder remade some old classic motorcycle games in a similar way?

I really like the PS2 Jester TT games, however theyre looking a little dated and may be a little hard to access the files to remake them due to the unusual file types. (It uses Lamp Libraries or .lmp files for short)

I would love to see this and some of the older SBK games remade, such as SBK 2001 and SBK 07, as they're perhaps my favourites. I mean can you imagine something like SBK 2001 with modern graphics, and some netcode installed for online play? It'd be awesome IMHO.

What games would people here like to see remastered in a modern engine? I'm sure there's going to be at least one GP500 suggestion, and maybe even some Richard Burns Rally lol.

I sadly lack the knowledge, skills, and patience to embark upon such a project, (Painting skins in GPB is pushing it for me), so if anyone is willing to have a bash at something similar, It'd be a nice little project.

March 16, 2019, 12:44:52 pm
Spent some time on iRacing, then I browsed GPB forums for some paints, to see if there's any new ones available. It's not a big deal installing paints, just pop them in the relevant folder, but it did get me wondering if it'd be possible to create a 'Trading Paints' style app for GPB, that can download/access the skins for that rider/helmet/bike automatically, providing the program is running in the background of course.

I don't really know much about plugins, or how the GPB server connections work, but even old games like Minecraft have the ability to see other peoples skins (MC has had this feature for as long as its had Multiplayer) without going into the files, hence my asking.
65

March 13, 2019, 08:37:39 pm
Possible wrong topic/forum here, but I recently purchased Pibosos MXB, and have been having a little fun with the supermotos. This got me wondering if any of the skills learned here, such as the braking and sliding, could be applicable to GPB, as many professional riders use dirt track/mx as a training tool.

Long story short I was wondering if there was a mod to something like Rossi's ranch, either in MXB or GPB, just to train on and have a bit of a bash at?
66

March 12, 2019, 06:39:29 pm
Due to the release of beta 15 there have to be a few settings updated in most modded bikes, and so far there's only a few that have had the updates done 'officially', leaving it up to us to figure out some values.
The main one I've found to get bikes working In b15 is the 'Disengage Max Torque' setting in the bikes cfg file, which once setup right allows the bike to be run in b15/b15b
This can be troublesome, as different people will use different values, and thus create a mod mismatch and incompatibility with other users, which is fine for offline play but wouldn't work online.

What this topic is intended to be, is sort of like a file reference of recommended values for most of the bikes, where people can post the edited values and then we can sort of get a standardised value for most mods/bikes out there.

Some people already have posted updates to their mods, and there are some servers up with their recommended settings, however I don't personally think thats' ideal. (I don't think this is ideal either but it seemed an easier all encompassing solution)

I did do a bit of testing for the update to the WSBK pack, and I found a few things regarding riding style that can affect what values are used.
(For instance, on the MGP18 bikes and the WSBK pack, I have a tendency to run little to no electronic aids, and slide the bike considerably more than others seem to in videos and online, thus skipping the gears as the torque settings have changed)

The values that work for me are below

Feel free to post other bikes settings if you've tested them.

I'll try and add a new bikes value every other day.
67

March 12, 2019, 10:35:58 am
Announcement trailer released for MotoGP19
It seems to promise to fix all previous issues with the games, and seems focused around esports?..
I hope they get it right, as a full mgp game is fun but I doubt they will
68

March 10, 2019, 04:23:42 pm
I've been debating making an attempt at modding a track, and was wondering where I'd find height data from? Is it something I'd need to pay for or is there a decent free site/location out there?
Any help on how to get started would be great.
Thanks.

March 09, 2019, 01:43:52 am
Here is the skin I plan on running in Julix's R3 Cup championship together with Alvaro, providing all goes to plan. May be changed or updated in future.

09/03/2019: Quick Update: Changed the logos on leathers from Michelin to Pirelli

Or download the individual leathers on their own here: 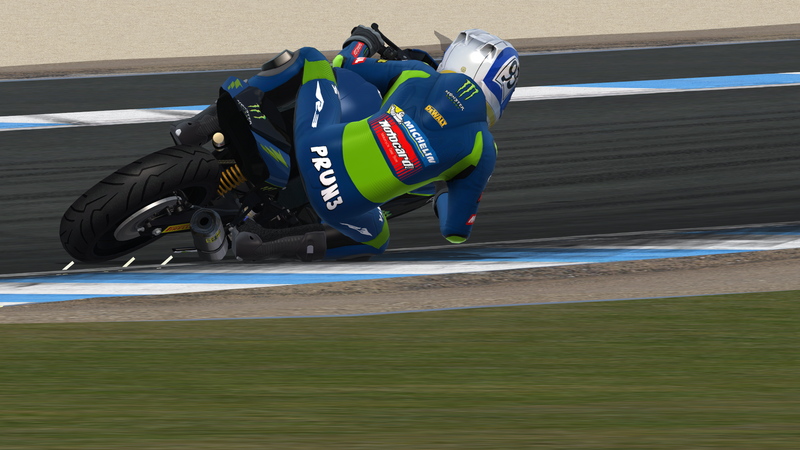 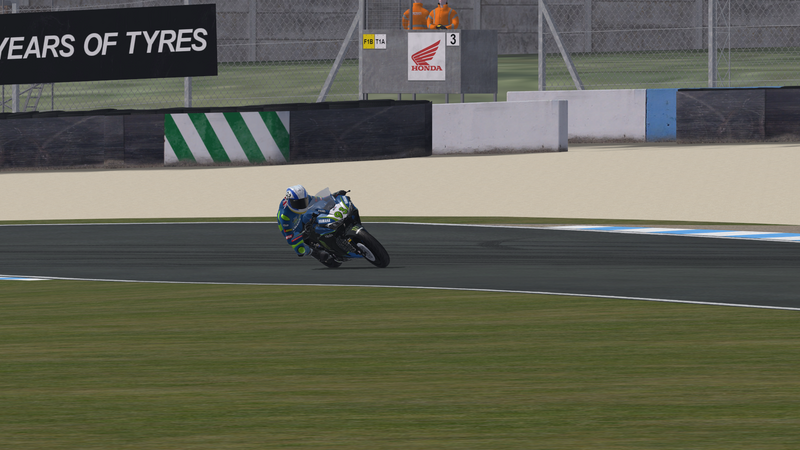 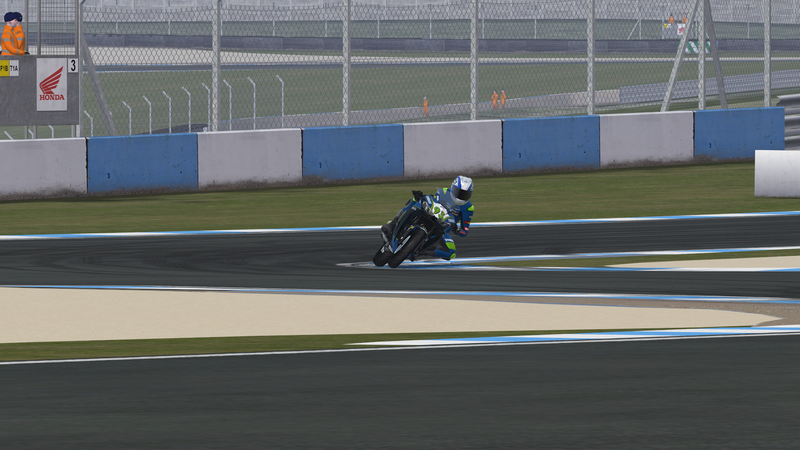 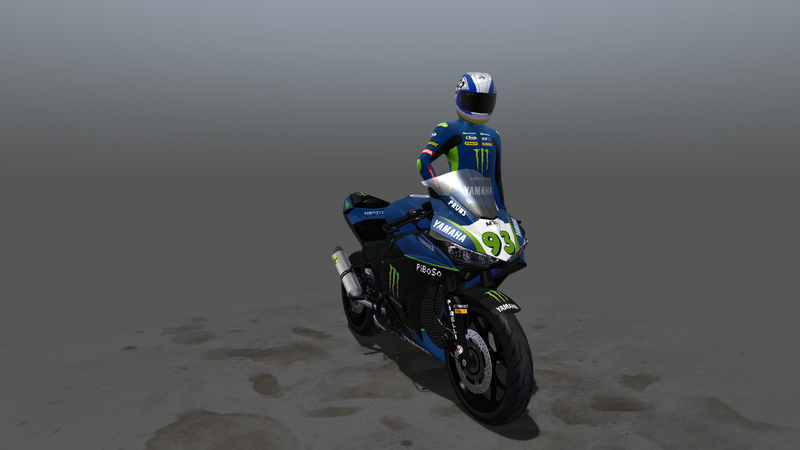 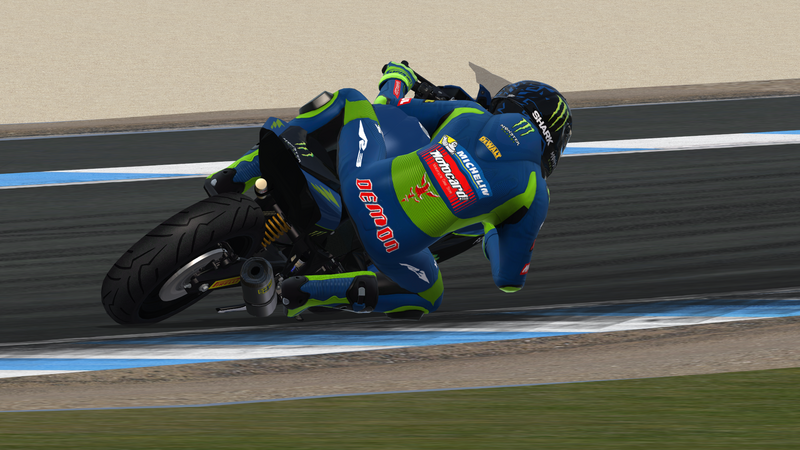 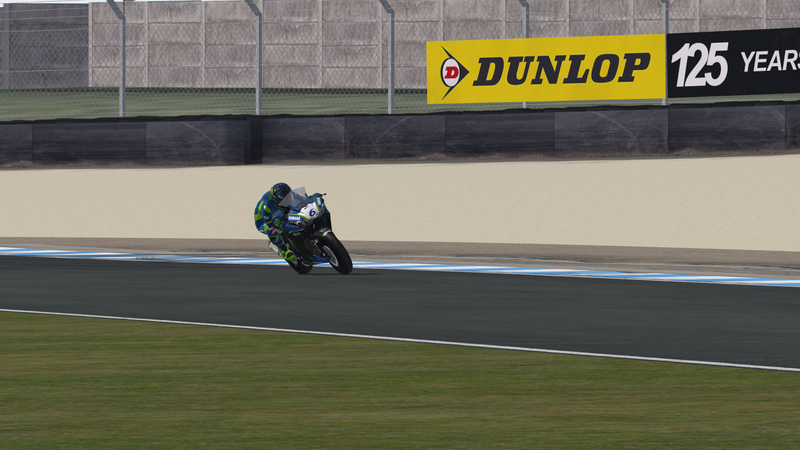 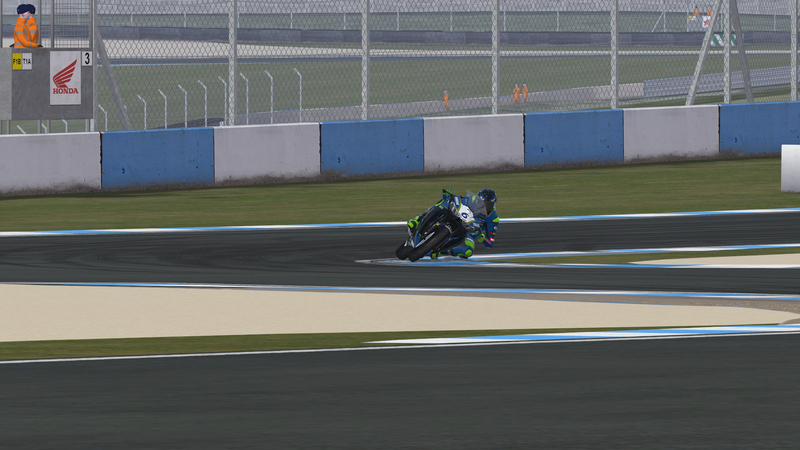 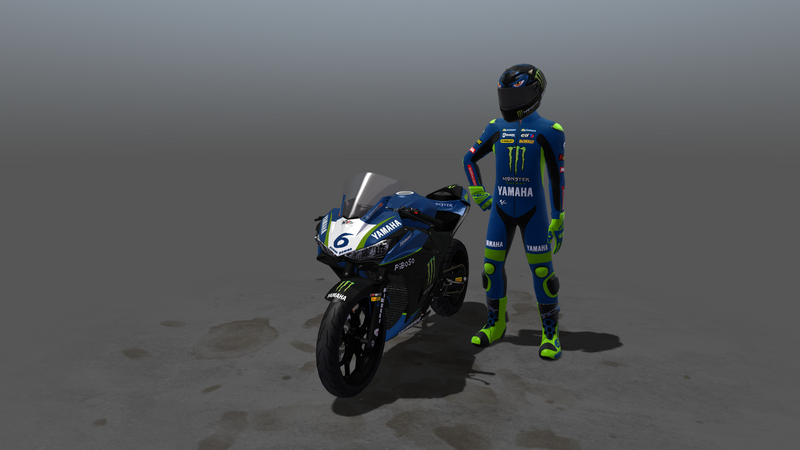 March 08, 2019, 02:03:25 pm
I've seen with the IMT WSSP 300 that there is a 3d model that can be imported into Photoshop. I was wondering what the reason was for this, and whether it's be possible to edit and save the bikes livery on it? If so that would make it so much easier lining up stripes if you could.
Just debating whether it's going I be beneficial finding a link for a Photoshop or a similar program, as I've been using paint.net with a psd plugin.

Any advice on what's possible in the 3d Photoshop model would be great thanks.

March 08, 2019, 08:16:58 am
The rider tracking option for using a great headset/trackIR to control rider weight is a great idea, and would be perfect and intuitive. However there are a few things that I've found that could be improved/changed.

1) Options to control how far I have to move my head irl compared to how far my rider moves in the SIM. A sensitivity option would be nice, as often a 1:1 ratio is not practical. I don't know if this can be changed in the files with parameters, but it'd be nice to have some sliders in the menus.

2) Rider tracking moves the top half of the body only upon request. I think this option would be a nice little middle ground, whereas using the auto L/R lean controls only where the rider is located on the seat, and the headset controls where the top half/head appears, both visually and in the body positioning for tuckin/braking. To me it like seem more natural that way rather than moving my head to the left and the rider moving his lower half first, as in my chair I don't have that option.
Combined with the first suggestion this could be a lot more natural, although in the grand scheme of things, maybe not more realistic when compared to hanging off ones chair.
Although for me, something that feels natural and intuitive, (But is still with comparable inputs to the real world) is much more immersive that something that is designed to be 100% realistic, but awkward to use. Its the reason why I don't use the current option for rider tracking, despite me using VR in GPB
72

I've been playing something called VTOL VR, which is basically a flight simulator that utilizes the Oculus touch handsets, (and others) instead of a mappable solid joystick/gamepad. It's quite an intuitively done, and is awesome to use. So satisfying actually seeing your in-game hand push buttons and start the plane, as well as using the gyros to move the joystick/throttle etc.

I was wondering if there's ever going to be something similar implemented in GPB, as having the option to manually move your arms on the bike would be pretty cool, as well as actually pushing the pit button and grabbing the bars.

VTOL VR is developed by a single person, (I think), and it's implemented really well, and really smoothly, albeit the game is built completely around this concept.

It'd be a fun little thing to see in GPB, and while I doubt it'd be as good as a full handle bar setup, it'd be a nice little gimmick, and could open up so many different development paths.
Imagine actually having to crouch in your room and pick up the bike manually. You've been framed would have a field day 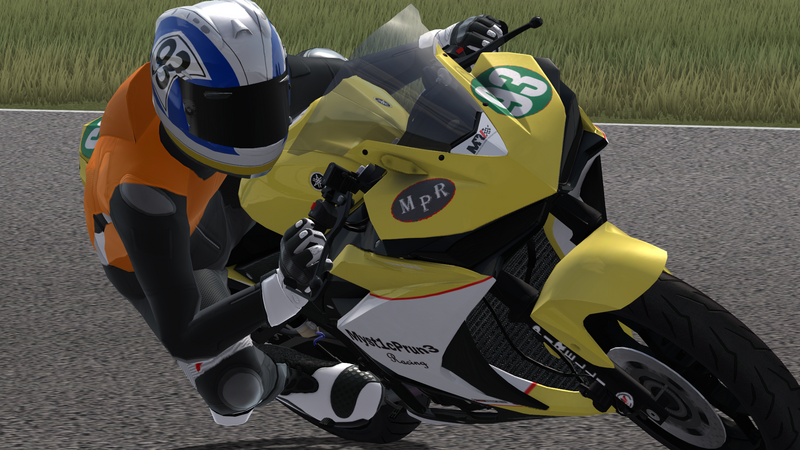 DO: Make sure its setup correctly, (I have the Oculus, and even though the oculus app can be a pain its quite helpful for the setup.
DON'T: Test on a hilly track. This is a mistake I made, and let me tell you, the corkscrew on a 600, with a headset thats not setup 100% will make you sick. (Although it is fun while it lasts)
DO: Test with a Bike that's smooth, I used the WSSP2018 bikes by Julien
DON'T: Whip out a ducati Panigale on Macau. That is again, vomit inducing, and quite frankly, in a 1:1 3D Visual Ratio, F**king Scary.
DO: Get some custom lenses if you need Glasses. While you can get some glasses behind it it can be awkward, and custom lenses are more natural. Going to look into mine soon.
DO: Make sure the motion sensors are setup right. A jagged movement/losing connection will be vomit inducing.
DON'T: Crash.
DO: set your ingame FOV, PITCH and TILT adjusters right

Everything is in 3D, and that's a weird sensation to get used to, especially the sense of speed, however once I did, i actually found It more intuitive, even with a gamepad. I could judge slides, both on the entry and exit of turns, and was able to recover from running wide, relatively smoothly, rather than just launching myself into orbit.

Overall, VR I'd reccommend VR over a flatscreen, should you have the space and PC to use it with.

Can't wait to jump online for a session later

February 24, 2019, 06:25:45 pm
is there a sneaky/quicker way to align logos on paint skins over various parts?
The bike I'm creating a skin for has a long screen, that has a number board plastered over it, and some parts overlap w/the fairing. I was wondering if theres a quicker way to align them, or if its just trial and error? 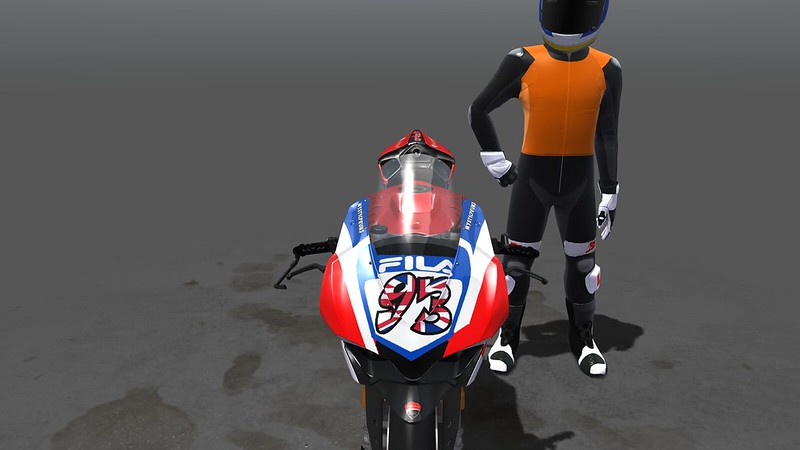 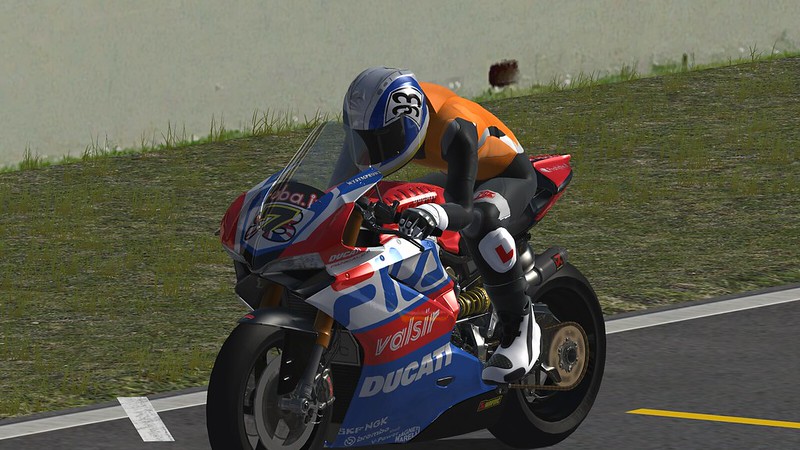 February 16, 2019, 06:30:33 pm
I've got a new PC and installed GPB on it, and got the latest TrackIR software, and it doesn't seem to register that there's a game running, despite the fact that I've got all the relevant settings selected in the game. Is there a file to edit, or have I missed something else
80